Welcome to Beyond Belief Wiki 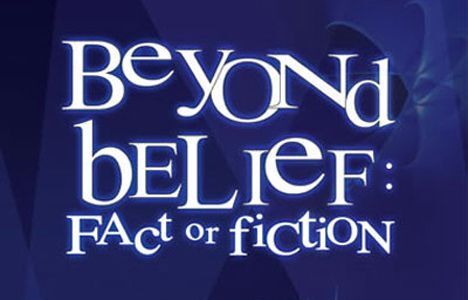 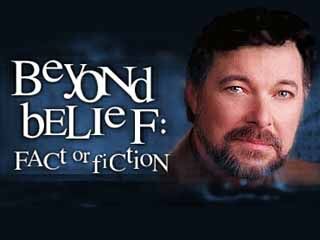 The stories told in the program all had some connection with the supernatural, ghosts, psychic phenomena, coincidences, destiny, and/or with other such unusual occurrences.

Each episode of the show, as well as all stories within, were introduced with a pun or some other form of witticism pertaining to the particular story and episode, and they all included the underlying moral that not everything we perceive as truth and falsehood is as such, and that it can often be difficult to truly separate fact from fiction, hence the show's title.

The majority of true stories on the show were based on first-hand research conducted by author Robert Tralins, while many of the ones that turned out to be fiction were simply modern-dressed re-telling of urban legends.

From series two onwards Jonathan Frakes would end each story with a pun related to the story, for comical effect.

Beyond Belief: Fact or Fiction has gained a cult following. The show was often aired sporadically, sometimes going for weeks or even months between airings. There is a two-year lag between Don LaFontaine and Campbell Lane's stints as narrator for the show, during which time it was believed that it had been cancelled, only for it to be brought back for another season in the summer of 2002. It was eventually cancelled after its 2002 season. During his stint as narrator, Lane played the character John August in the story entitled 'The Cigar Box' shown in episode 11 of the series.

Community content is available under CC-BY-SA unless otherwise noted.